Hello friends we are here with the analysis of SSC CGL 2015 TIER 1 Exam held all over India on 16th August 2015. Staff Selection Commission now has acquired the pattern of asking the same type of questions on the same type of concepts. From the last few years there has been no change in the pattern of questions asked and this year was also the same. Afternoon Shift paper was lengthy & time taking same like 09th Afternoon Shift Exam Paper & has high level than Morning Shift paper.

1. AIADMK General Secretary J Jayalalithaa was sworn in as the Chief Minister of Tamil Nadu for fifth time. She is the 18th Chief Minister of Tamil Nadu and succeeded O Panneerselvam who resigned on 21 May 2015 following her acquittal on 11 May 2015 in the disproportionate assets case by the Karnataka High Court. The court overruled the Bangalore’s special court judgment which found Jayalalithaa guilty.

2. David Cameron’s Conservative Party on 8 May 2015 won the UK General election 2015 by securing 331 seats in a Parliament of 650. With this win, the incumbent Prime Minister David Cameroon will continue to be in the office.

3. The Appointments Committee of the Cabinet gave its nod for appointing G Mohan Kumar as the Secretary of the Ministry of Defence. 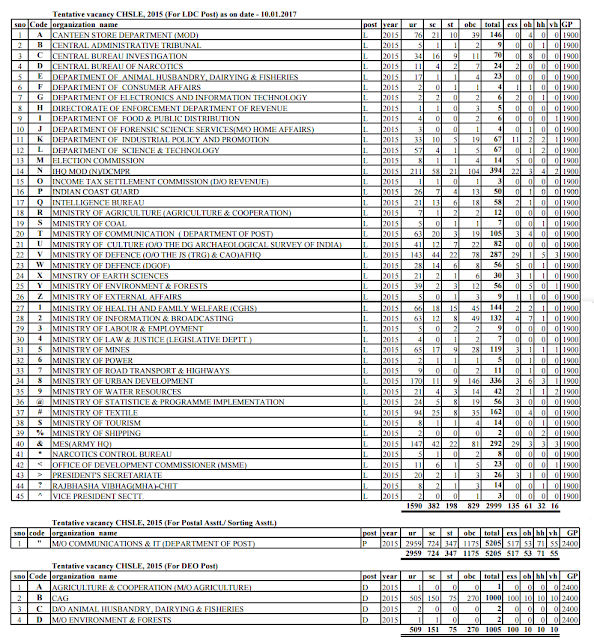 How to Apply: Application in the prescribed format should be send to the regional / Sub Office of the SSC depending upon the choice of the exam center by the candidates. Candidates can apply Online at SSC Website http://ssconline.nic.in or download offline form by clicking here.


Educational Qualifications:
Must have passed Graduation examination from a recognized Board or University or equivalent as on 01.01.2015
Only For Delhi Police - Valid Driving License for LMV(Motor cycle and Car)

Fee:
Rs. 100/-. No fee for SC/ST/PH/Women and Ex-Serviceman. Fee will be paid only in the form of "Central Recruitment Fee Stamps (CRFS)". If you are applying Online, payment can be through Net Banking with SBI.  OR The candidates submitting their applications on-line should pay the requisite fee only through State Bank of India either in the form of challan or net-banking.

How to Apply:
Application in the prescribed format should be send to the Regional / Sub Office of the SSC depending upon the choice of the exam center by the candidates. Candidates can apply Online at SSC Website http://ssconline.nic.in


Note: The examination will be conducted ON-LINE, if Government approval is received by the Commission.